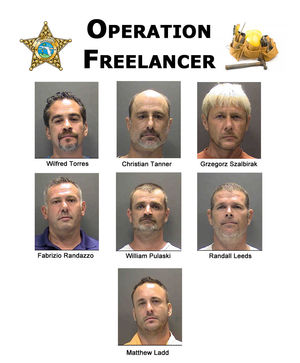 SARASOTA, Fla. — A crackdown on unlicensed contractors operating on the Suncoast has resulted in multiple arrests and charges filed.

In a release issued today, The Sarasota County Sheriff’s Office says it has arrested seven people on multiple charges during Operation Freelancer II, an investigation to protect citizens from unlicensed contractors.

As subjects arrived at the target residence last week, the DBPR database was checked to determine if they were licensed, registered as a contractor, and/or had the required workers compensation coverage or exemption to perform the work they proposed to do. Job quotes ranged from a few hundred dollars to $50,000.

In all, the operation resulted in eight felony charges and 12 misdemeanor charges. One defendant, Matthew Ladd, was already cited by both Sarasota and Manatee counties for code violations this year. It is also important to note that another defendant, William Pulaski, has an extensive criminal history with 25 prior felonies and 28 prior misdemeanors including armed robbery and drug charges.

“Legitimate Sarasota County businesses are undercut by unlicensed contractors who have skirted the formal process for some reason, in some cases due to criminal histories,” said Sheriff Tom Knight. “They are also creating financial and physical risk for consumers, since faulty work can only be detected through the inspection process.”

Since 2012, the Sarasota County Sheriff’s Office has detectives assigned to investigate claims against people who engage in contracting work without proper licenses, permits or certification. A first offense usually results in a civil citation by code enforcement but subsequent violations lead to misdemeanor or felony criminal charges.

Florida law sets specific rules and guidelines for obtaining professional licensure, and the people who have met these requirements are held to professional standards. Consumers can verify licenses with the DBPR online at www.myfloridalicense.com, by calling 850-487-1395, or downloading the free DBPR Mobile app through iTunes or the Google Play store.

To check a Sarasota County license, call the Customer Service and Permit Center at 861-6678 or 861-3029. To report someone you suspect is acting as an unlicensed contractor or performing work without a permit, call 861-5000. For more information visitwww.scgov.net/DevelopmentServices/Pages/ContractorLicensing.aspx.

Note: Surveillance video provided by the Sarasota Sheriff’s Office has been removed from this post because it included images of contractors that are licensed and were not charged.